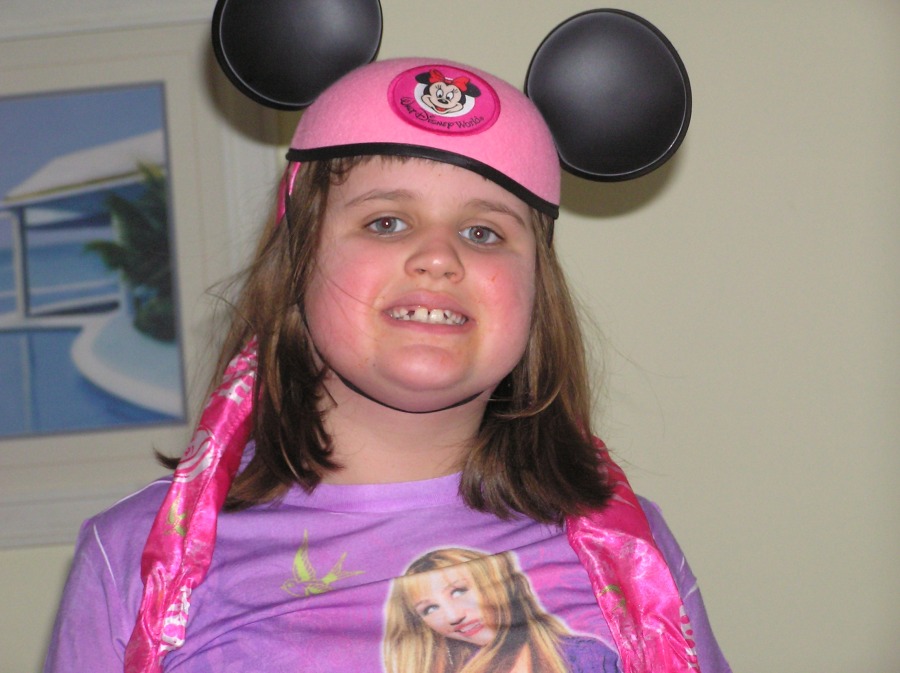 While this past trip to Disney went overall very well, we have had some ‘memory making’ adventures traveling to and from the Magic Kingdom in the past. Here are two; laugh and enjoy!

My friend, Sarah White, (blogs: “In Honor of Sarah (House) White” Oct 10, 2013 and “God Sent You” Nov 30, 2014) encouraged me to get the Disney VISA card to earn “Disney dollars” for Disney World during one of our dinners out. I followed her advice and while it might take a few years to earn enough for this family of 6 to go, it has been great.

One year we decided to drive straight there to save on the cost of the hotel and also travel while the kids were sleeping, but someone needed to tell Sarah that. Sarah screamed from the moment she got into the minivan. We tried to tell her we were going to Disney, but she wanted nothing of it. It was my turn to drive and David was sleeping in the passenger seat. As I turned to look out the driver’s side window, something flew by my ear, brushed my hair and landed on the dashboard. I was startled to see it was Sarah’s shoe! What?!?!

I looked in the rearview mirror and Sarah let out a scream and tried to chuck her other shoe at my head.  Seeing it come, I moved out of the way. I took both shoes and put them in the basket next to my chair.

Kendall woke up and screamed, “Hey, that’s my shoe!!” and before I could react, WHACK!! Kendall’s shoe was thrown at my head and it hit its target. It hit it hard! Sarah still not satisfied in expressing her anger, went for Kendall’s other shoe.

Like an army general I barked out to the kids, “Everyone!  Protect your shoes!”

My yell woke up everyone in the car. I will never forget David’s puzzled expression!

“Yes, dear, I thought we all needed a friendly reminder in the middle of the night about the importance of protecting our footwear. I’m really passionate about it!”

Sarah didn’t stop so all the kids had to remove their shoes and we kept them up front with us for the duration of the trip. She would have to find other forms of ammunition…

That was on the way down to Disney. Here is a story about the way back up.

Driving straight through was too much we learned and we decided to drive from Disney to Knoxville, TN and we spent the night at a hotel. The hotel had a pool and we thought the kids would enjoy a time of swimming after being cooped up in the minivan the entire day. They did until disaster struck.

I was in the pool with the kids and then something plopped next to me. I turned to see something falling down to the bottom of the pool. Was it one of those diving sticks?  (They are a pool toy that kids drop in a pool and dive to pick up.) Then I heard another plop right next me and David yelled, “Jill!  It’s Sarah!”

I turned to see Sarah standing on the pool ledge with poop all over her hands. David was sitting in a lounge chair outside the pool and tried to race to her but she got one more piece of poop thrown into the pool before he stopped her.

I got out of the pool and looked at David. He said, “We’ve got to tell the other people in the pool. I’ve got Sarah.”  So that meant me…oh boy.

There was a family also in the pool area with us. They had bought KFC for dinner and were eating it poolside while their children swam. Nothing kills a lovely picnic dinner by the pool like a biohazard!

How do you tell people this? I took a deep breath and apologized for interrupting their dinner. I have never seen people pack up and leave an area so quickly! The kids literally leaped out of the pool!

Then David said, “We need to tell the front desk.  I’ll clean off Sarah.” Okay, that one was a toss-up.  That job wasn’t much fun either! I went to the front desk dripping wet in my bathing suit and towel and explained what happened. Before we even left the pool, signs were up that the pool was closed.

We got back to the hotel room and I was distraught. Are we going to have to pay for the cleaning?  (Thankfully, the hotel said no.) I wanted to leave first thing in the morning, or more like in the darkness of night. I didn’t want to show my face here again.

“What about the free breakfast?” said my cost conscience husband.

The cold, icy, ‘you’ve got to be kidding me’ stare I gave my Beloved answered that question. As we left early the next morning to grab breakfast at McDonalds we saw men coming in wearing biohazard white suits and walking towards the pool area. I am not joking. I looked at David and mouthed, “RUN!”

Now I laugh, but at the time, I was so discouraged. I wondered if Sarah would ever get passed these behaviors. As my mom says, “This, too, shall pass” and it is true. While I do get a bit nervous anytime Sarah is swimming (though she hasn’t pooped in a pool in years), I am no longer worried about footwear flying at my head.

It indeed has passed, but I also have a loving Savior that has been with me each step of the way no matter what I am facing or what is being thrown my way. He goes before, He has my back. I am surrounded by His love and care regardless of what ‘disasters’ we face!

“The Lord Himself goes before you and will be with you; He will never leave you nor forsake you. Do not be afraid; do not be discouraged.” Deuteronomy 31:8